The Festival of Fall

The Festival of Fall

Description of Seasons of Siskiyou Series

Surrounding my home, covering more than one million acres, is the Rogue River - Siskiyou National Forest which takes up three southern Oregon counties and one northern California county. It’s a magical place that fills the imagination and lifts the spirit; a place that inspires with its uniqueness, its legends, and its larger-than-life vistas.

Each season in the Siskiyou mountains is a unique experience unto itself. So, with an attention to the feelings this place evokes at any given time of the year, I designed four generative tokens to create an impression of the emotion–the calming quietness; the peaceful solitude; the overwhelming contrasts and variety of forms, shapes and textures; the magic and playful mystery; the welcomingness and foreboding. These four works feature clever and inventive creative coding techniques in a rich, graphic style to craft a stunning impression of the Seasons of Siskiyou.

Token 3 of 4 - THE FESTIVAL OF FALL (1990 x 1080) p5js Generative Token.
The days are getting shorter, and the nights cooler. The playfulness of summer gives way to the season of harvests. Dancing in a shower of colorful leaves, you enjoy a playful adventure involving pirate ships and cowboy hideouts; a journey of imagination realized in the child-sized solitude of a rustic tree house. As fleeting as a season is, the festival of fall will soon conclude when the magic of change sweeps away the color to take on the weight of winter.

The Festival of Fall celebrates the waning beauty of growth and renewal with falling, colorful leaves, golden bushes, distant mountains, and a beautiful recursive tree framing a cozy clubhouse. A weathered, broken fence; a half-hearted refrain surrounding a nascent place, is lined by piles of leaves. Dense, stands of tall grass give tell of the ripeness of the year with their golden hues. Glints of light diffuse in the fluttering orbs of bluzzy motes that glide whimsically throughout the scene.

Output and Coding Feature of “The Festival of Fall”:

The Festival of Fall features a gorgeous recursive tree drawn with a pointillism style. An overcast sky with a generative cloud-effect; animated leaves fall in capricious patterns; recursive bushes and a generative fence; a dust-mote-like optical effect; and random mountains.

Press the DOWN ARROW to save a frame as a png image file.
Press the LEFT ARROW to toggle the animation on/off.

Each iteration changes the position of bushes, shape of mountains, trees, and alters features of the clubhouse, leaves and fence. The animation toggle is given a random default state at start–so, some tokens will appear animated at first, while others will not.

Token Published May 1, 2022 on FXHASH set at 75 Editions.
Written and designed by Ed Cavett using the p5js library.
Token 3 of 4 from the series “The Seasons of Siskiyou.” 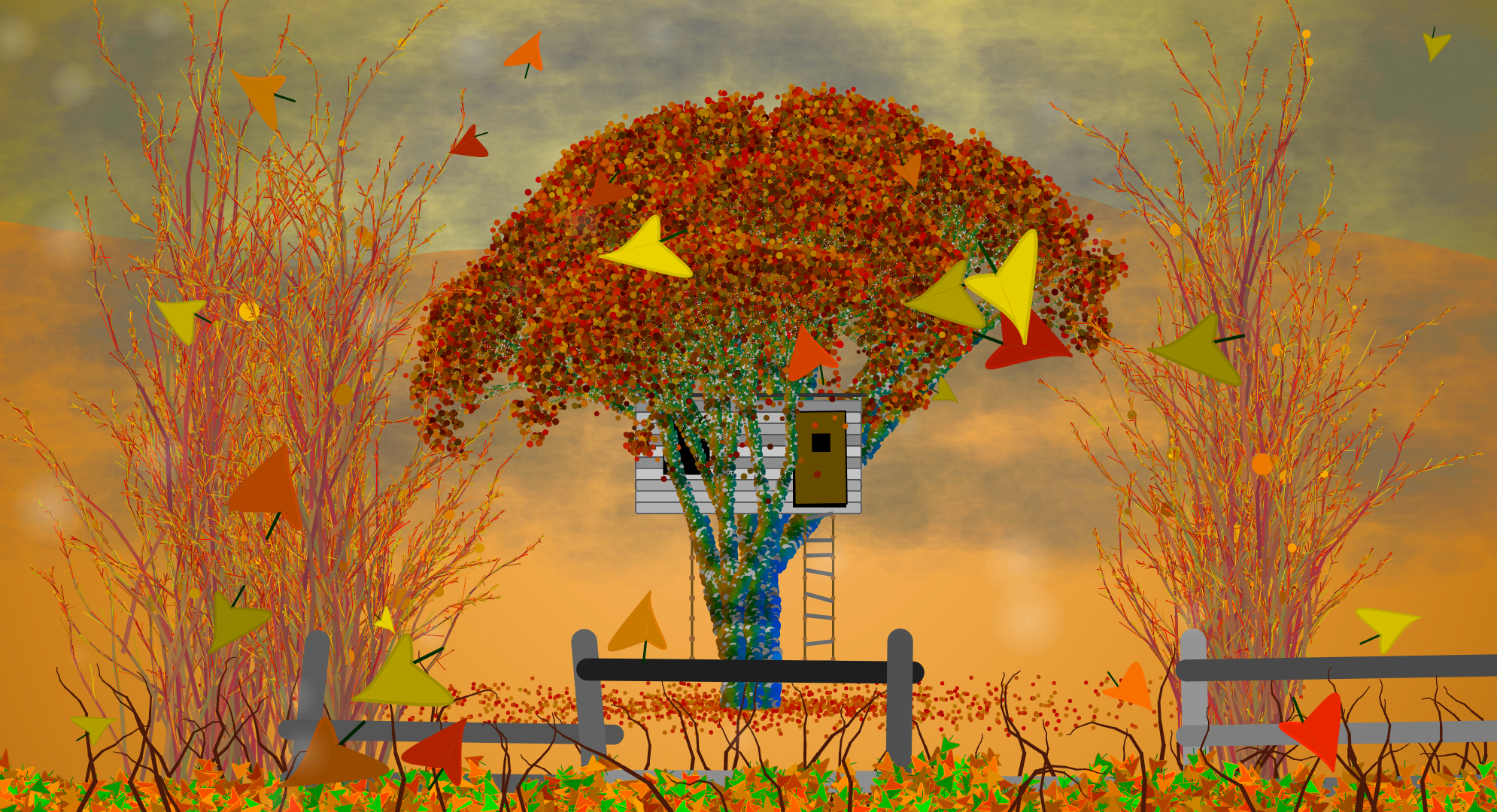